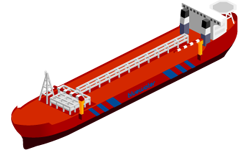 What is an FPSO?

A Floating Production Storage and Offloading (FPSO) installation is a floating facility, usually based on a (converted) oil tanker hull. It is equipped with hydrocarbon processing equipment for separation and treatment of crude oil, water and gases, arriving on board from sub-sea oil wells via flexible pipelines.

Treated oil is transferred to cargo tanks in the FPSO ship’s hull. Treated gas is used as fuel for on-board power generation, and excess gas is either re-injected back into the subsea reservoirs or exported via a pipeline to shore. Water that is produced during production is discharged overboard, within the environmental limits. Alternatively, water may be injected into the reservoirs.

The FPSO concept allows oil companies to produce oil in more remote areas and in deeper water than would have been economically possible with other technology, like fixed piled structures. Furthermore, it has storage capacity for the treated crude oil produced and is equipped with an offloading system to transfer the crude oil to shuttle tankers for shipment to refineries, rather than requiring a pipeline to transport oil to shore.

One of the typical features of an FPSO is the turret mooring system, which is usually fitted inside and integrated into the FPSO’s hull. This is a Bluewater core technology. The turret is moored to the seabed with chains, wires and anchors and has bearings allowing free and unrestricted 360° rotation of the FPSO around the turret (“weathervaning”). The FPSO will normally lay head to the prevailing environment.